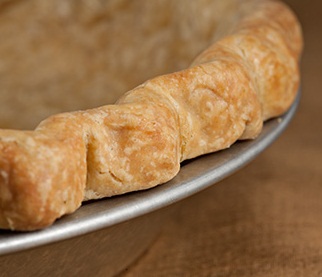 This a traditional pie crust like my Nana made.

I remember working in the kitchen with her, making a sugar/cinnamon tart out of my own little piece of pie dough.

*All ingredients should be cold, especially the lard (throw it in the freezer for 10 minutes if necessary)*

“For years, I wondered why people raved about lard pastry. Mine was either falling-apart-tender or flaky and tough. But I’m glad to have persevered, because a lard crust made well has no equal. It is more tender, more flaky, and more crisp than any other and doesn’t shrink even if baked only an hour after mixing. It also browns less fast than a butter crust, making it convenient for pies that require longer baking. Lard crust is ideal for savory pastries. You can use half butter, but it is not quite as light, though very close, and for savory food, I prefer the flavor of all lard. The success of this crust depends on the quality and temperature of the lard.” -Rose Levy Beranbaum’s The Pie & Pastry Bible

Why add vinegar to your pie crust dough?

When flour is mixed with water, gluten is formed–these are the protein strands that are necessary in yeast bread making, etc. When making quick breads the mixture is only mixed until blended–never over-mixed–so that too much gluten is not formed. The vinegar is used in your pie crust recipe because the acid (along with the shortening) keeps the gluten strands from getting too long–thus resulting in a tender, flaky product.